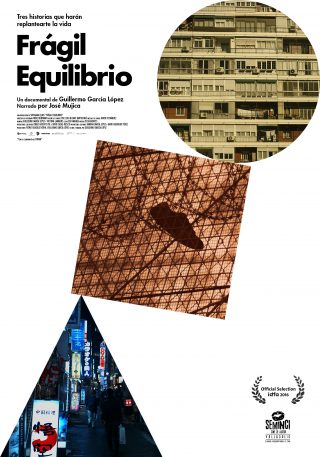 Three Cultures is once again taking part in this event organised by the ONGD Movement for Peace in which more than 200 students and teachers from seven middle schools in Seville and Huelva are participating.

On this occasion the screening will be of the documentary film Fragile balance (Spain, 2016, 83 min) produced by Guillermo García López and winner of the Goya 2017 Award in its category.

This film interlaces three stories on three different continents characterised by different contexts that aim to represent what it’s like to live in the world in the 21st century; a Japanese executive whose life revolves solely around his work, a sub-Saharan community settled in Mount Gurugú who risk their lives every day trying to cross the border and a group of families in Spain who seek ways to survive while they face the crisis, real estate speculation, political corruption and eviction from their homes.

The Two shoes in development exhibition, co-developed in Africa and Spain by MPDL, will also be viewable.

This cycle is developed at a state level with financing from the Spanish International Cooperation for Development Agency (AECID). It consists of four screenings covering topics such as the right to sustenance, climate change, women’s rights, migration and refuge and urban violence.