Home > Event > > Cinema on Tuesdays. ‘Ya man aach’ (It was better tomorrow)

Cinema on Tuesdays. ‘Ya man aach’ (It was better tomorrow) 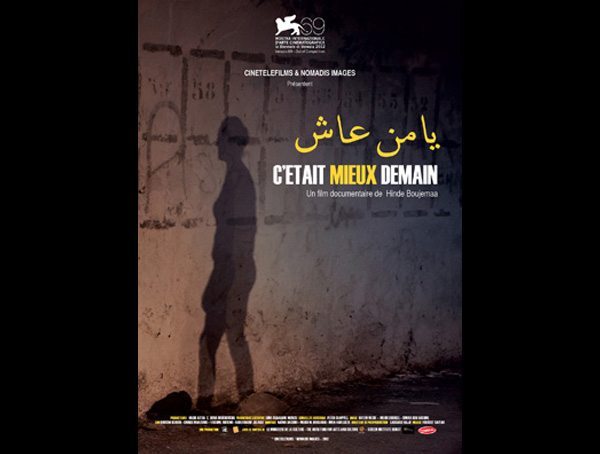 Four years after the eruption of the events dubbed the “Jasmine revolution” Tunisia seems to have found a path to democratic life, even if it is not free from upheavals, as highlighted by recent incidents. The adoption of a new constitution, the hands-on experience of the Islamist party Ennahda in government and the recent victory of the secular party Nida’a Tunis are all steps in the right direction.

This renewed sociopolitical context, apparently stable, has been accompanied by changes in the cultural sphere, including in the field of cinema. The growing presence of female directors and the proliferation of documentaries are both proof of this change.

As mentioned in the presentation of our previous film programme, Militant Women, dedicated to Arab female directors, women filmmakers have taken advantage of the opportunities brought about by the pro-democratic uprisings to secure their place in a field where they had always been present.

In the case of Tunisia, this trend started to be felt more clearly with the new millennium thanks to the work of directors such as Nadia El-Fani or Moufida Tlatli, among others, who have served as role models for a new generation hatched out of democracy.

The new democratic life also makes possible the proliferation of documentaries, a genre complex to deal with during the dictatorship, given its function as a tool for reflection, reporting and criticism of reality.

This selection of movies aims to provide a representation of the works produced in post-revolutionary Tunisia by filmmakers such as Hinde Boujemaa and Kaouther Ben Hania, whose documentaries will be followed by a feature film by Raja Amari, Tunisian Spring, which will be screened for the first time in Spain and has been translated and subtitled in Spanish by the Three Cultures Foundation.

Ya man aach (It was better tomorrow).