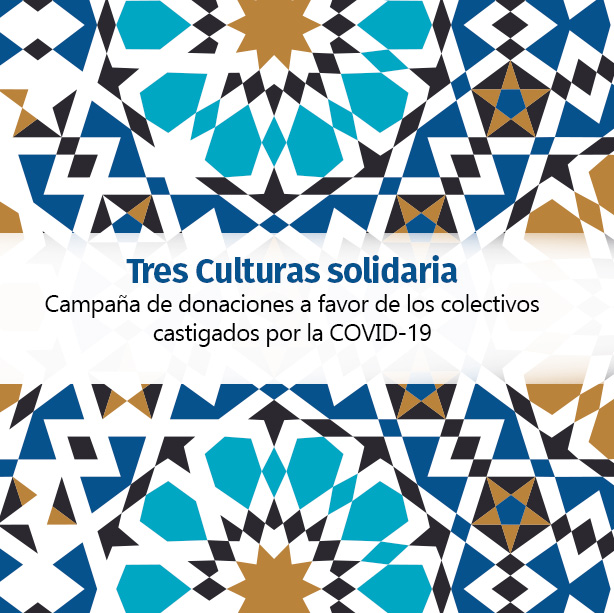 The Three Cultures Foundation has launched a campaign to help some of the groups which have been the worst affected by the effects of COVID-19, which it invites everyone who wishes to collaborate in a voluntary manner to take part in.

All our activities are free, such as the summer movie screenings, the open-air concerts and the literary proposals which we have returned to on-site activities with. However, anyone who wishes to do so can contribute to this campaign by donating the amount they consider appropriate, which will be destined to social causes via agreements with different NGO’s working in this field.

To differentiate these donations from those generally received by the Foundation, donors can state in the ‘Observations’ box that they are donating for ‘Tres Culturas solidaria’.

If you would rather donate in a very simple manner via the Bizum platform, you are welcome to do so. You can find the account for these donations by using the following sending code: 00664

If you wish to obtain tax deductions you can request a donation certificate by emailing: donaciones@tresculturas.org

Remember that your contributions may benefit from fiscal incentives or be tax deductible, as laid out in the tax reform approved under Law 27/2014 of November 2014, on Corporation Taxes, which in its 5th final Disposition introduces modifications to articles 19 and 20 of Law 49/2002, of December 23rd, of the fiscal regime of non-profit entities and fiscal incentives of patronship, relating to the types of deductions applicable for donations made to foundations and associations declared of public use that come under the special fiscal regime regulated by Law 49/2002. Therefore, as of January 1st 2016 the types of deduction are as follows:

The Three Cultures of the Mediterranean Foundation is very grateful for your collaboration.