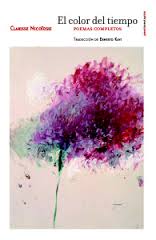 The Color of Time brings together the complete collection of her poems for the first time. Her work is written in ladino or Judeo-Spanish, the language that Sephardic Jews spoke and kept –almost intact– when they were expelled from Spain. After the death of her mother, Nicoïdski understood that part of that language died with her. She then decided to write these poems “to retain somehow the sound of her voice”.

Born in France, Nicoïdski lived in Morocco during her adolescent years. Her parents (both from Sarajevo although her mother was Italian and grew up in Trieste) met in Barcelona at the time of the Spanish Republic.

Critics consider Nicoïdski the most important Sephardic poet of the 20th century. Her work had a strong influence on some Spanish American poets, especially Juan Gelman and the Spaniard José Ángel Valente. Her poems have been published in different anthologies in Spain and France. She was also a successful art critic and a renowned novelist.

Readers can pick up their copy of the novel from the Three Cultures library.

18.00 h. Book club meeting. Guest reader: Juan Carlos Encabom, nurse, student of Arabic Philology at the University of Seville and of Modern Hebrew at the Three Cultures of the Mediterranean Foundation. He is a member of ‘Beit Rambam’ Progressive Jewish Community of Andalusia and is interested in interreligious dialogue.

Organized with the support of ‘Obra Social’ La Caixa.