Inicio > Others > André Azoulay, co-president of the Fundación Tres Culturas, receives the Andalusian Medal for Solidarity and Concord

André Azoulay, co-president of the Fundación Tres Culturas, receives the Andalusian Medal for Solidarity and Concord 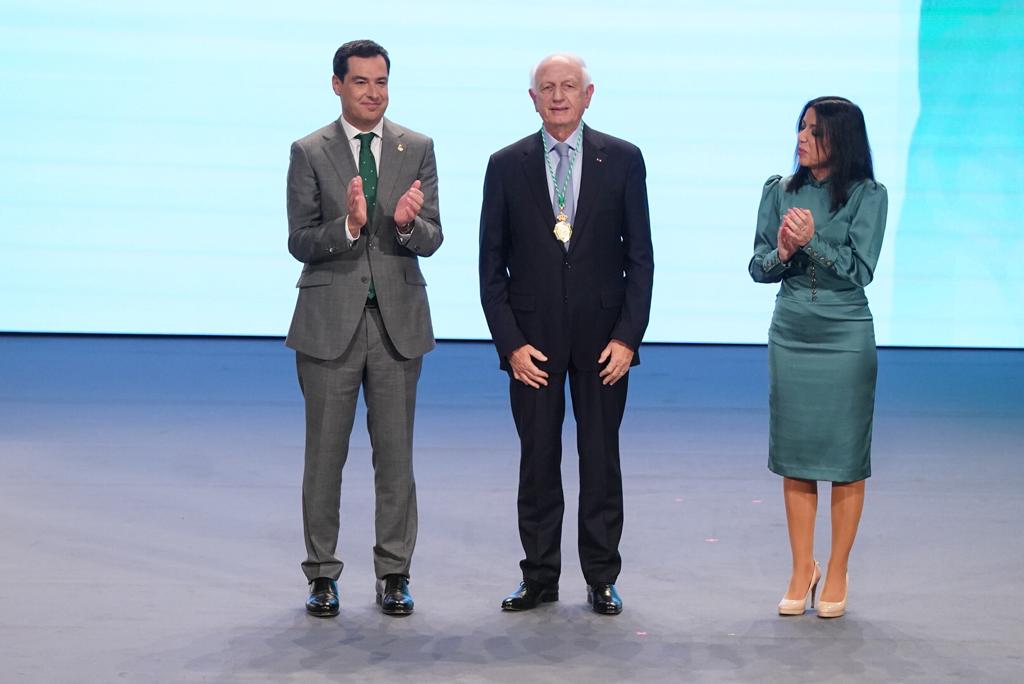 The co-president of the Fundación Tres Culturas del Mediterráneo (Three Cultures of the Mediterranean Foundation) and advisor to His Majesty the King of Morocco, André Azoulay, has received the Andalusian Medal for Solidarity and Concord, an award with which the Andalusian Government has recognised his defence of dialogue between the civilisations, cultures, peoples, women and men on both sides of the Mediterranean.

With this accolade, André Azoulay enters the select group of foreigners who have been recognised in this field by the Junta de Andalucía regional government, which has only on rare occasions looked abroad to award these medals. Overseas recipients of the medals include Senegalese Amadou Mahtar M’bow, director general of UNESCO (1987); French-Lebanese writer Amin Maalouf (1994); Irish researcher and Hispanist Ian Gibson (1998); French Christine Ruiz-Picasso, named honorary daughter of Andalusia in 2003; and Portuguese writer José Saramago (2007).

André Azoulay, born in the Moroccan city of Assaouira in 1941, has joined this small group of award-winners, who have in common not only their foreign origins but also their link to Andalusia. To this respect, André Azoulay was at the fore in the creation and constitution of the Fundación Tres Culturas del Mediterráneo (Three Cultures of the Mediterranean Foundation) with headquarters in Seville, and he was made co-president upon its launch 20 years ago. He continues to hold that position, providing his support, stimulus, visions and advice, which have contributed significantly to improving and strengthening relations between Morocco and Andalusia. 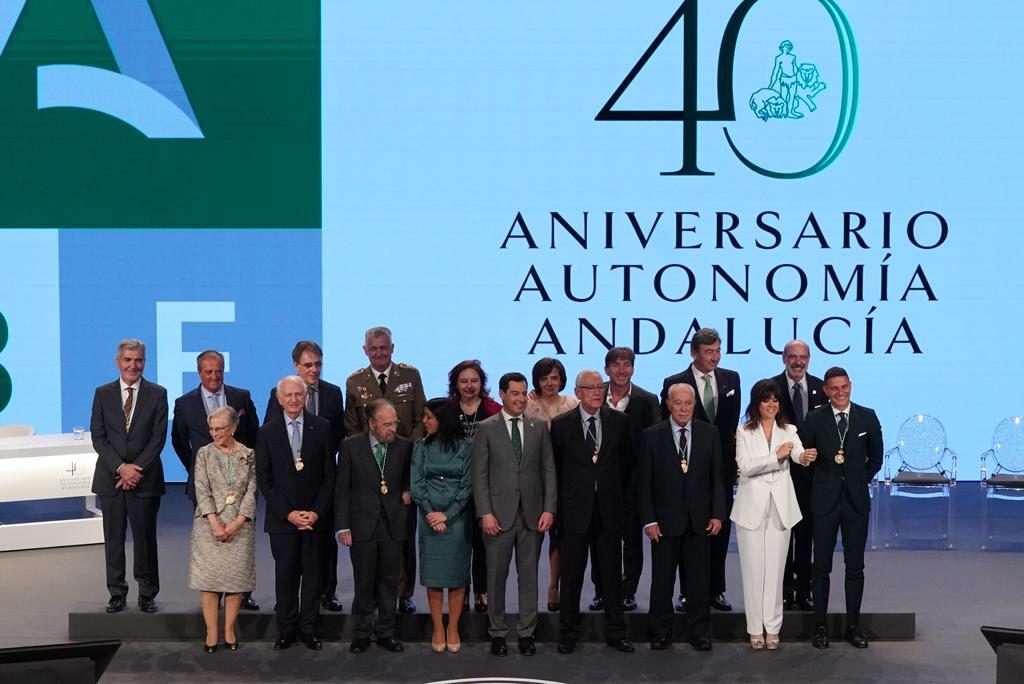 Since then, André Azoulay has become a true guardian of coexistence between the two lands. Over two decades, he has been an unarguable pillar of this Andalusian-Moroccan tandem, present at meetings of the highest order between leaders from each side of the Straits, a labour which has not only remained imperturbable over the years but has in fact intensified.

To this respect, the medal recipient himself has said that “Andalusia has a very special attraction for all of us who live in this Mediterranean area. For its culture, for its history, for its heritage, because in this land Jews, Christians and Muslims were able to live in harmony. But not just for that historical legacy, also because Andalusia is very much aware of the fact that all the people of this area have common challenges which we must meet together.”

“And its history of understanding and vocation for dialogue is what makes this Spanish region an exceptional place to work for a Mediterranean with a future of coexistence based on respect and tolerance. For that reason, the Kingdom of Morocco and the Junta de Andalucía decided back in the day to create the Fundación Tres Culturas: to face these common challenges with shared values of freedom and responsibility. Andalusia and Morocco have a lot to share with each other, in all fields, to continue advancing and progressing from a financial, social and cultural point of view,” he added.

André Azoulay couldn’t hide his deep satisfaction at being granted this Medal. “I wish to express in my own name and in that of the Moroccan people the immense honour it is to receive the Andalusian Medal for Solidarity and Concord from the Andalusian government. Andalusia and Morocco are today, before the eyes of the world, an example of fruitful cooperation and concord between brother peoples, rooted in a common cultural base,” he stressed. 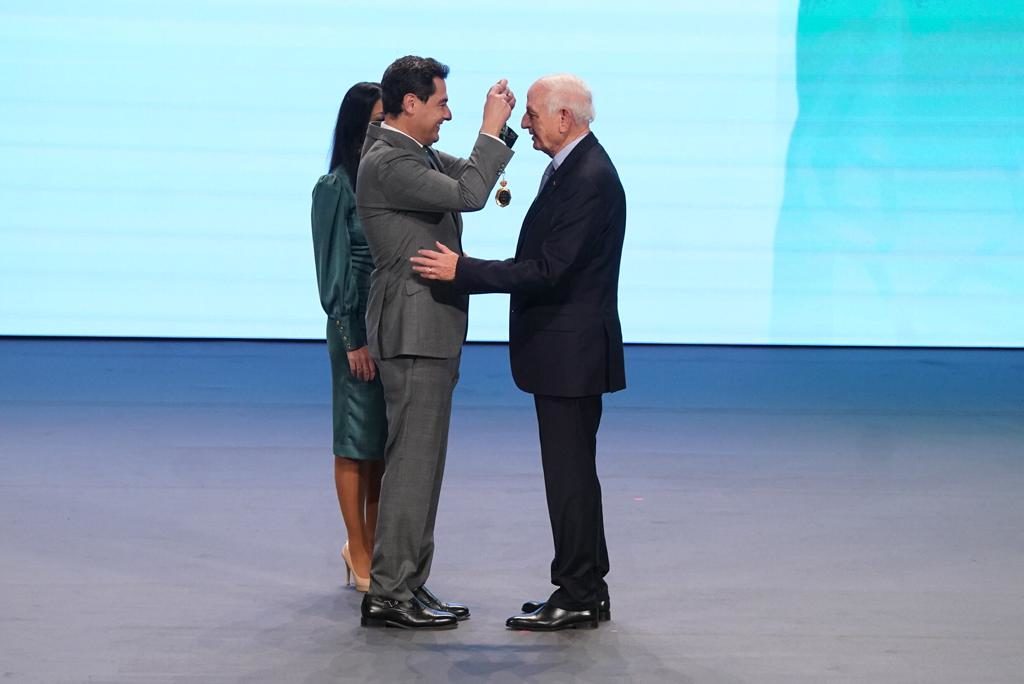 An entire life dedicated to understanding between the people

André Azoulay was born in 1941 in Essaouira (Morocco). His own origins (Moroccan, Jewish, Berber and Arabic) readily implied the values of interculturality, which he later worked to cultivate with the best of European and Islamic influences. He trained as a journalist in France and was the founder and financial director of the Maroc-Informations newspaper. Between 1967 and 1991 he held various positions within the Paribas financial group and, as of 1991, he has been advisor to the King of Morocco on economic and financial matters.

Despite being a noteworthy character in the world of finance, the aspect which he has however stood out for the most over the years is his fervent defence of dialogue between the civilisations, cultures, peoples, women and men on both sides of the Mediterranean. Founder and member of a number of institutions which have participated in the Middle East peace process over the last three decades, André Azoulay has taken part in different movements and associations which aim to assist the reconciliation process between Jews and Muslims.

He was at the fore in the creation of the Fundación Tres Culturas del Mediterráneo (Three Cultures of the Mediterranean Foundation) and was named as co-president at its launch, a position which he continues to hold today along with Advisor to the Presidency, Public Administration and Interior at the Junta de Andalucía regional government Elías Bendodo. His role and international recognition have been crucial to turn the Fundación Tres Culturas (Three Cultures Foundation) into an irreplaceable instrument which, from the heart of Andalusia, makes its valuable contribution to those who work in defence of freedom, interculturality and dialogue between the people, keeping alive the spirit of this land where there is space for everyone, and in which different cultures and traditions can coexist in peace.

One example of these good relations and cultural cooperation between Andalusia and Morocco is the Festival of the Atlantic Andalusias, which has been held in André Azoulay’s city of birth, Essaouira, since 2003. The Junta de Andalucía regional government, through the Fundación Tres Culturas del Mediterráneo (Three Cultures of the Mediterranean Foundation), backs this festival which has, for 16 years, been gathering musicians from different parts of the Mediterranean who display the Jewish-Arabic inheritance of their music and the link between Andalusí music and modern flamenco. The Festival of the Atlantic Andalusias is also a meeting place for intellectuals, artists, politicians and representatives of civil society to converse at debate forums led by André Azoulay on the different cultures, their identity and transmission, bringing value to the common roots of Mediterranean music and making of Essaouira a cultural ambassador of Andalusia in Morocco.

Mr Azoulay has also been President of the Anna Lindh Euro-Mediterranean Foundation, a member of the Committee of Wisemen for the UN’s Alliance of Civilisations, Advisor to the Shimon Peres Centre for Peace and a founding member of the C-100, the committee for the Davos Forum dedicated to Dialogue between Civilisations and Religions. Other awards he has been granted during his long career include the 2014 Prize for Tolerance which is awarded each year by the European Academy of Sciences.