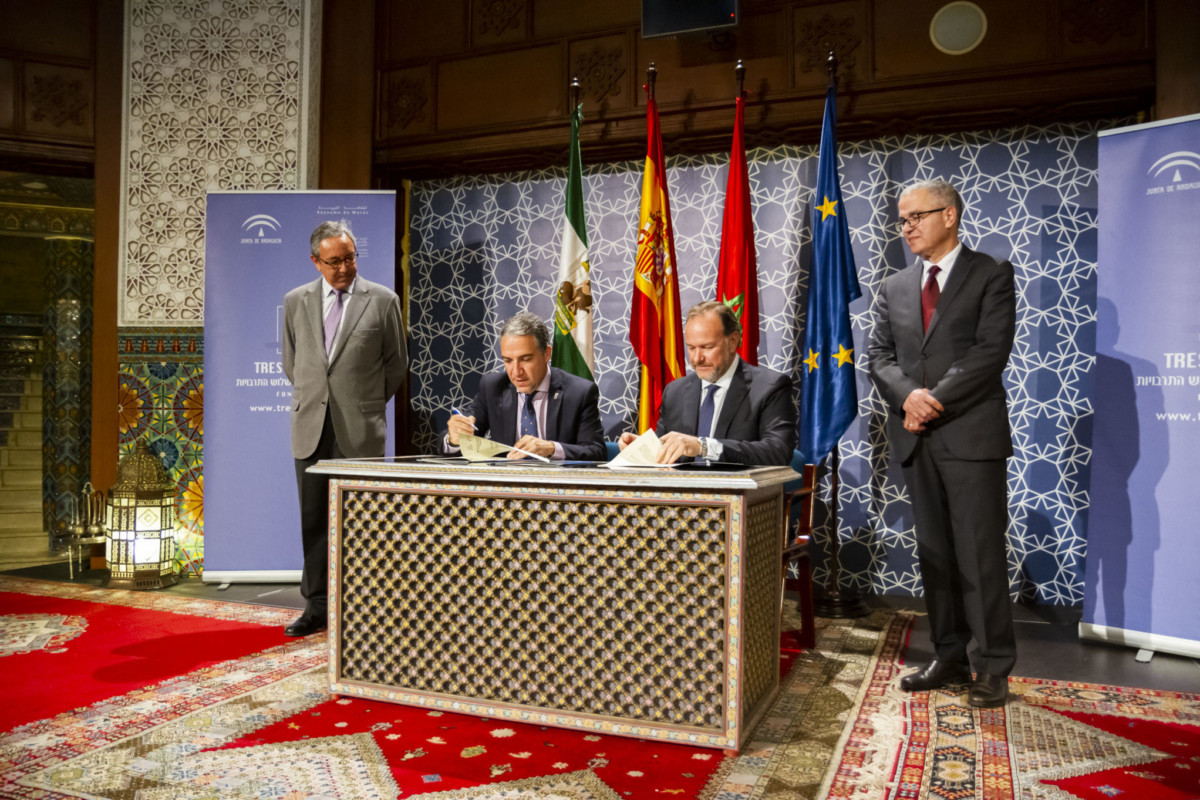 The Fundación Tres Culturas del Mediterráneo (Three Cultures of the Mediterranean Foundation) and INTERFRESA, the Andalusian Strawberry Interprofessional Association, have drawn up and signed a general collaboration protocol for “development of activities to help favour the participation and social, financial and cultural integration of the Moroccan worker community in Andalusian society.”

The document was signed at 7pm on the 1st of April at the headquarters of the Fundación Tres Culturas (Three Cultures Foundation) by the Junta de Andalucía regional government’s Minister for Presidency, Public Administration and Interior Elías Bendodo (as representative of the institution) and by INTERFRESA president José Luis García-Palacios to record the interest this foundation, the Andalusian government and the strawberry association all have in maintaining the best possible working and social conditions for these employees.

Plus, as an institution with links to the Junta de Andalucía regional government and the Kingdom of Morocco, the Fundación Tres Culturas (Three Cultures Foundation) maintains in this agreement its intention to favour “dialogue between INTERFRESA and the relevant Moroccan authorities regarding labour and integration of Moroccan expats with an aim to detecting the workers’ needs and favouring a stay in Spain under optimal working and social integration conditions.”

To this respect, it’s worth noting the considerable implication of the Moroccan government, though the Ministry in Charge of Moroccan Expats and Migration Matters of the Moroccan Government and the Work and Professional Insertion Department of the Kingdom of Morocco to ensure the best possible conditions for workers who have travelled from Morocco to various parts of Huelva for the current strawberry campaign via the IntegrARTE programme led by Tres Culturas.

In fact, various representatives of the government, together with representatives of Tres Culturas, INTERFRESA, the Spanish and Andalusian governments and teachers and advisors who work with the aforementioned workers (most of them women) have already held a number of meetings to define the diverse lines of action within this programme, which includes educational and leisure activities and even an accompaniment programme for more personal matters such as sanitary treatments or bureaucratic procedures. All with a common goal which has been reiterated by all the involved parties: to help these workers feel safe and accompanied, allow them to carry out their agricultural tasks in decent conditions and make the most of their spare time with educational and cultural activities.

Many of the activities included in the IntegrARTE calendar have already started, such as the Spanish courses for Moroccans which are underway in Cartaya, Almonte, Palos de la Frontera, Moguer, Rociana and Lepe (with a total of 13 groups.) Plus, the first date on the cultural programme is set for this Friday, the 5th of April, in Cartaya where the AWA theatre company will perform the play Tagnza in Arabic.

This general protocol has been created with an aim to setting up a long-term plan of action, aimed to run not just during this campaign but also to be renewed and enlarged, as all parties have stated.

Meeting on the IntegrARTE programme at the Fundación Tres Culturas: accompaniment, training and cultural proposals for the female Moroccan seasonal workers in Huelva

Representatives of the Ministry for Moroccan Expats, the Interfresa Association, the Moroccan Consul in Seville, educators and consultants and members of Tres Culturas set the basic guidelines for this programme, which will be running until June.

This agreement has been signed during the Hispanic-Moroccan Forum on Immigration and Integration in Rabat.