Inicio > Articles > Songs for hope. Music in the Holocaust 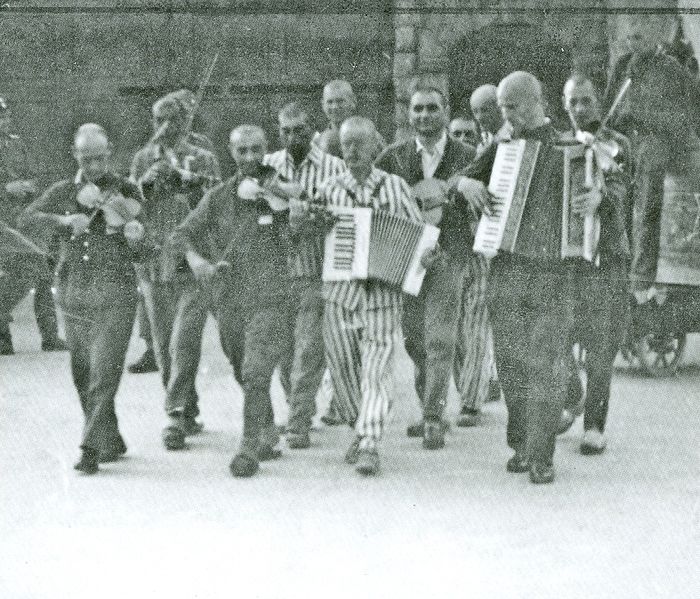 The survivors who saw them march towards the gas chamber on that 6th of October of 1944 still remember, decades later, how the children from the Auschwitz infirmary sang Wiegala, Wiegala to fend off the fear of death, which was awaiting them just a few minutes later and a few metres ahead.

They were accompanied by Ilse Weber, the affectionate woman who looked after them at the Theresienstadt camp for months and wrote many poems, stories and songs for them. In a final act of love for those children, one of whom was her youngest son Tommy, she voluntarily accompanied them to inspire in them a final ray of hope through music. Ilse composed the lullaby for them shortly beforehand, which said:

The moon is a torch

against the black background of the firmament,

looking down at the world.

How quiet it is!

Stories like this were repeated too many times in other camps, in other countries. And what is much worse is that they could be repeated in present and future times, it doesn’t matter where.

It’s vital to avoid forgetting to avoid a return to horror. Therefore, in the centenary of his birth, we are still morally obliged to recall the words of the author and survivor of the Holocaust Primo Levi, “It is not licit to forget, nor is it licit to be silent…” (The drowned and the saved – 1986.)

Luckily in a world where immediacy takes precedence, there are still people who dream of rescuing and placing value on the echoless sounds, the unspoken words. The project that carries this name, launched at the Fundación Tres Culturas (Three Cultures Foundation) on the occasion of Holocaust Remembrance Day, has been the personal venture of Begoña Hervás, president of Juventudes Musicales (Musical Youths) of Bilbao.

Hervás’ incredulity was the seed of this project: “I knew the music that some musicians had made during their time in concentration camps but I was surprised that, with so many millions of victims, just a few pieces had transcended. I discovered that practically all the prisoners made music, and that music was made in all the camps and ghettos; all of them! I inevitably asked myself: “how is it possible to make music in those circumstances?”

Sure enough, there are thousands of musical pieces that were composed at the Nazi concentration and death camps. Some of them were created by professional musicians, while others were just popular tunes that some prisoners put lyrics to. They composed and sang to survive, and also as a way of fighting against the other use of music, the indecent use of those who make horror of beauty, despair of hope.

The prisoners were regularly forced to sing Nazi songs and SS marches with the sole intention of humiliating them. Military marches and pieces by Wagner were played over loudspeakers during the night to stop the prisoners from resting or to drown out the sounds of the executions. It was also general practice to receive them upon their arrival at the camps with a band or choir of prisoners who played to calm spirits and avoid upheavals. The professional musicians were treated like slaves, forced to compose and play at their executioners’ parties and private meetings.

But the prisoners also composed and made music of their own accord, for themselves and for their companions. Music served as a cultural survival technique and as therapy, and helped them to calm their fear.

Tattered musical scores, scribbled on bits of bandages, rags or any other materials that could be used to write on remained as witnesses to their suffering. They hid them in places the guards didn’t usually search, such as under the floors of tool sheds or latrines.

In the initial stages of the camp system, the predominant style was that of the amateur music of youth and labourer movements, and professional musicians were the exception. But as the number of deportations increased, so did the number of intellectuals, artists and professional musicians from different countries. That’s why the music created in the cradle of the Holocaust has room for the diverse musical traditions of the prisoners’ nations.

Within the system of ghettos and concentration and death camps created by the Nazis, there were some cases in which there was some scope for the prisoners’ cultural life, even if it was only for the regime’s propaganda purposes. The clearest example was that of Theresienstadt. In the face of the increasing indignation of the international community over the inhumane conditions at the internment centres, the Nazis allowed representatives from the Danish Red Cross and the International Red Cross to visit the camp in June 1944. One of the greatest Nazi propaganda operations was then carried out. The camp was beautified to a point that it looked like a normal city. On the day the commission visited Theresienstadt, the interns were allowed to wander freely, the children attended a school that never really existed and the families were entertained with musical and theatre shows composed by and for themselves.

That was how the children’s opera Brundibár, by Hans Krása, or Viktor Ullmann’s opera The emperor of Atlantida or the Disobedience of Death were created. The latter was officially launched in Amsterdam in 1975, as it was not allowed to be performed at the camp as the figure of the emperor was considered to be a satirical portrayal of Hitler. The composer, one of the most brilliant musicians of the time, was murdered in a gas chamber shortly after he wrote it.

The collaboration of Yad Vaseham (Museum of the History of the Holocaust) and other institutions and museums, as well as that of Francesco Lotoro, professor of music, composer and pianist who has dedicated almost 30 years of his life to the search for and collection of around 8,000 pieces of music composed in concentration, work and prisoner camps during the Second World War, have been vital in the compilation of the pieces included in this show. During their relentless search, they visited hundreds of libraries and archives and even rescued scores from the ruins of the camps themselves.

Thanks to them, Begoña Hervás obtained the manuscripts of the songs to work with: “I digitalised the scores, translated the texts, searched for information on the authors, the circumstances that led them to write each of those songs and the particular characteristics of the camps and ghettos they were created in.”

However, there was still a lot of work to be done. The scores only contained the melodic line. A composer had to be found with the capacity and sensibility necessary to make the harmonies and piano arrangements. Arnold W. Collado, President of the Juventudes Musicales (Musical Youths) of Seville took charge of this part of the project.

The result, some masterful arrangements that perfectly back up and reinforce the sense of the text and the intensity of the feelings poured into each of the pieces.

Among the many difficulties involved in the project, Collado considers one of the most complicated to have been working with music written by amateurs: “Of the 15 songs we worked on, only four were written by professional musicians. This meant a huge amount of work, because there were imperfections in the composition that had to be corrected without losing the essence of the piece. For example, I’ve had to create interludes or intermediary passages to bring a sense to them.”

The selection of the musicians who play the pieces was also transcendental for Begoña Hervás. Youngsters Mercedes Gancedo, soprano, and Beatriz Miralles, pianist, were perfect for the role both for their technical virtuosity and for their ability to connect with the public.

But Echoless sounds, unspoken words is not, cannot be, just a concert. The story of terrible pain within every song must be supported and reinforced by the staging. It is therefore a musical-stage show that tells the story of the suffering of the composers and their companions. Directed by Jon Amuriza, theatre group Odissea Ensamble performs “a concert in 3D” that creates the scene of every song to reveal what the Holocaust really was as intensely as possible.

Because, ultimately, Echoless sounds, unspoken words is a commitment to preventive memory. One that aims to shake sleepy consciences awake to ensure the horror is never repeated.

Juventudes Musicales (Musical Youths) was founded in Brussels in 1940 in the middle of the Second World War. In the midst of the horror, the despairing youths of occupied Belgium needed a reason to cling to life, an ideal to group themselves around. At the end of the war, in 1945, fruit of the will to use music as a vehicle of peace, the Musical Youths of Luxembourg, Belgium and France founded the International Federation of Musical Youths. Soon afterwards, Germany joined the federation, so that what began as a peaceful protest movement became a movement of reconciliation of the youths of Europe through music. Today, International Musical Youths, with headquarters in Brussels, is present in fifty-five countries, including Spain since 1952. In recent years, Musical Youths has opened its arms to new styles including alternatives such as flamenco or jazz.

The Fundación Tres Culturas’ (Three Cultures Foundation’s) Family Learning project promotes the learning of Arabic by children of Moroccans who live in Andalusia to avoid them losing their links to their parents’ country of origin.