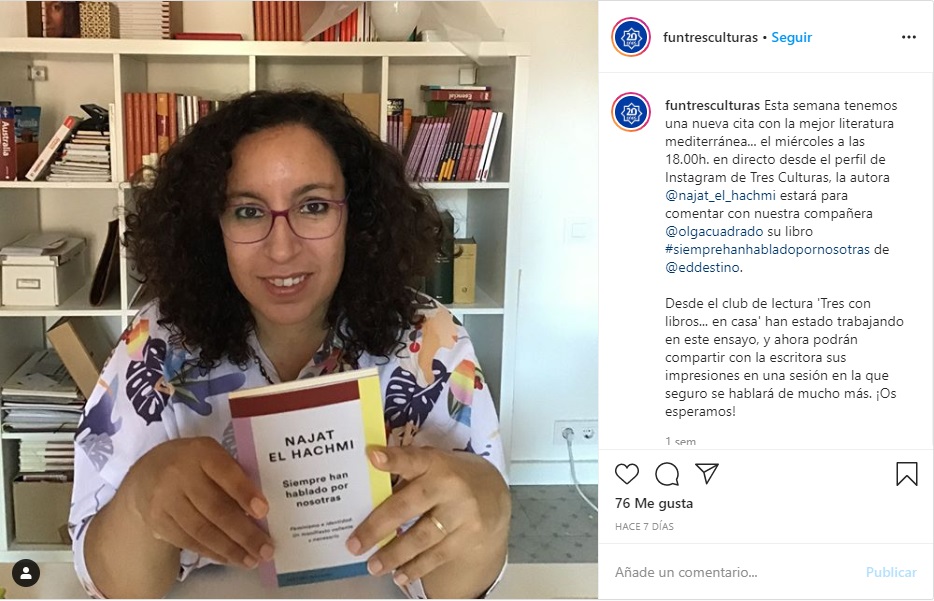 In its efforts to make these days more pleasant for their audience, the Fundación Tres Culturas (Three Cultures Foundation) has redesigned its traditional reading club, which has been up and running for over a decade, to enable people to continue to enjoy it online from their own homes.

Thus, via the Tres Culturas Contigo (Tres Culturas With You) project, the Foundation has filled a dual role: on the one hand, that of continuing to support culture and be an instrument of promotion of Mediterranean literature and, on the other, opening the club up to those who wish to take part, finally enabling people who had been on the waiting list to join the physical club for some time to take part as all that’s needed for the online version is an Instagram account and a copy of the book in ebook format.

This initiative was launched at the beginning of April with the book El cielo según Google (Acantilado), by Marta Carnicero, which was very well received by the audience despite the club’s new format.

The latest book to be analysed (in collaboration with Destino publishing house) was Siempre han hablado por nosotras, written by the Catalonian author Najat El Hachmi, who was born in Morocco. In this work, she disassembles patriarchy lucidly and courageously.

This second suggestion from the club proved to be very successful, with many people following both the initial session and the encounter with the author on the 27th of May, which was viewed live on Instagram by more than 300 people.

In a conversation with Olga Cuadrado, the head of the Fundación Tres Culturas’ Fátima Mernissi library, Najat El Hachmi spent more than an hour explaining the meaning of her work. The audience participated actively during the encounter, and the author was very willing to answer all their questions.

El Hachmi has been a flagship for the reading club since she was discovered more than ten years ago after winning the Ramon Llull award with El último patriarca (Planeta), a book which was presented at the Foundation in 2016.

Since then, she has taken part in many activities to promote Mediterranean literature organised by this institution and she has so far presented three of her books: La hija extranjera, Madre de leche y miel and the one we are currently focusing on: Siempre han hablado por nosotras (all published by Destino).

The Fundación Tres Culturas’ (Three Cultures Foundation’s) Family Learning project promotes the learning of Arabic by children of Moroccans who live in Andalusia to avoid them losing their links to their parents’ country of origin.

The survivors who saw them march towards the gas chamber on that 6th of October of 1944 still remember, decades